Over the past few months, rebate organizations across the country have been busy updating their programs for 2018. We've noticed the following trends for this year:

Historically, rebates for LED lighting have decreased 10 - 20% every year. This year, the rebate amounts have started to level out; the average prescriptive rebate for LED only went down 1% across all product lines. That being said, some specific products saw some big changes. LED Linear Tube Replacements dropped by 19% and screw-in HID replacement lamps by 35%. These decreases likely reflect the changing price in the marketplace as the costs of those solutions have also decreased significantly in the past year. In contrast, rebates for LED downlights and linear panels (2x4's) went up 5% and 10% respectively.

Rebates For DLC Standard vs Premium

A Design Lights Consortium (DLC) rating has always been important for LED rebates with about 80% of programs requiring it. In 2017, DLC introduced a new "DLC Premium" category. Products must meet higher qualifications and testing requirements in order to be considered for the premium classification.

It’s been unknown how utilities would adapt their programs to this classification. Looking at the current rebate landscape, DLC premium has not had a significant impact. Only a handful of programs require the DLC Premium qualification in order to get rebates. More commonly, programs offer an additional rebate or bonus if using a DLC premium product instead of a standard. The amount is usually an additional $10 to $20 so it doesn't always cover the additional cost of using a premium product and right now these extra incentives are offered in less than 10% of LED rebates.

Control Rebates Are Strong As Ever

Rebates for controls like occupancy sensors, daylight dimming, and lighting controls are still remarkably strong. In fact, since we have been tracking rebate changes over the past 8 years, rebates for controls are the only category that has not decreased at all. For products like fixture mounted and remote mounted occupancy sensors, the average rebate is still high ($20 - $30) compared to cost and in many cases the rebates make sensors an attractive and cost effective addition to most lighting upgrades.

Later this year, DLC will be finalizing its criteria for several popular types of lighting such as 3' tubes, 8’ tubes, and Biax/PL-L lamps as well as up-and-coming technologies such as color tuning fixtures. These categories represent some much needed additions where rebates have fallen behind due to lack of a DLC category. Because of the mid-year launch of the these new DLC categories, we don’t expect widespread adoption of prescriptive rebates until 2019. In the interim, once these products start appearing on the DLC list, there will be potential for custom rebates for these solutions. Custom rebates are generally more complicated to pursue than prescriptive rebates and basically need to be reviewed on a case-by-case basis.

Are you considering any energy efficiency projects for 2018? 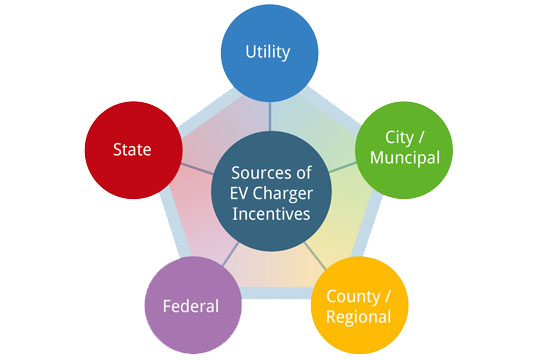 Where Can You Find EV Charger Rebates?